Our letter this week was F and we are continuing our work on counting to 3, the color blue, and squares. I was worried about Roo confusing the letter E with F since they are so similar. (We are only doing capitals this year) She did at first, but I explained the E has three “flags” and the F has only two. She’s comfortable with truly counting to three at this point so by the second day she was saying “F has only two!” And counting the flags to see if it was an E or F. She caught on to the /F/F/F/ sound much more quickly than the other consonants.

Both of us had little motivation to get going on school (or house) work. We mostly did a lot of art and sensory activities.

We started off with something Mommy was into so I could get some momentum built. I found these painting ideas on Pinterest and got into the Halloween spirit.

The first is a spider web drawn with white oil pastels (I added a black spider too), then we went to town painting the whole paper with watercolors. The oil pastel will repel the water from the watercolors making the web stay visible. I made the mistake of doing watercolor pencils first only to realize they didn’t have the same effect since the pencils could color on the pastel. (see the top web) Roo got frustrated when her first one with the pencils wasn’t turning out right and lost interest. I had to show her how mine was turning out to get her interested again.

The second is a cute bat silhouette painting. Cut out a couple of bat shapes and tape them to some black paper. Roo used her fingers to make dots with paint, but you could use Qtips or sponges or even brushes. but the fingers gave us some sensory involvement and created an awesome starry look. When you remove the bats, their black silhouette remains!

We sorted the petals by color first then I let her glue the petals in any order, except that the green ones had to go on the stem. She kept running over to “smell my flower” throughout the day.

Gluing feathers to the letter F is pretty straight forward. Except, if you also follow my Instagram or Facebookyou know that these photos have been doctored. Trying to help Roo with her school and keep her focused, while also cleaning up the mess from the last activity and getting the next activity ready all while on the phone with Daddy, I told her to put glue on the F and stick it to the paper. She followed my instructions, but I didn’t notice until the project was complete (and she was so proud of it) that the F was BACKWARDS!

Hence why it lacks the typical “F is for Feather” caption, so I could flip it with my editor.

Lastly, I bought a package of small pumpkins. I’ve seen several cute ideas for them and figured I’d find something to do with them to include them in our school work. Roo likes counting them and stacking them up before knocking them down again.

I also saw this on Pinterest and knew Roo would have a blast. I combined this with a few other fall sensory bin ideas and she played for almost an hour. Longer if I hadn’t convinced her to come on our daily walk. 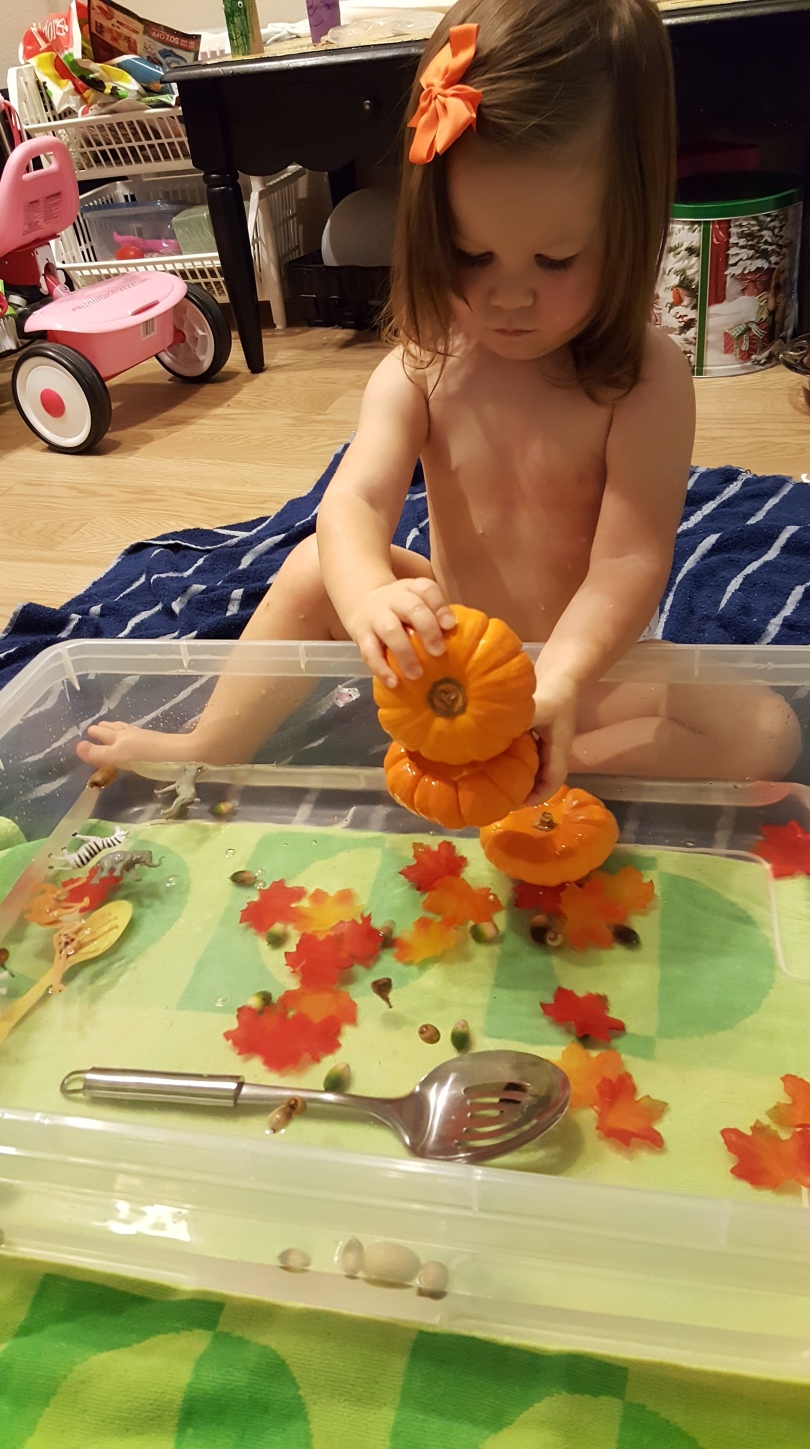 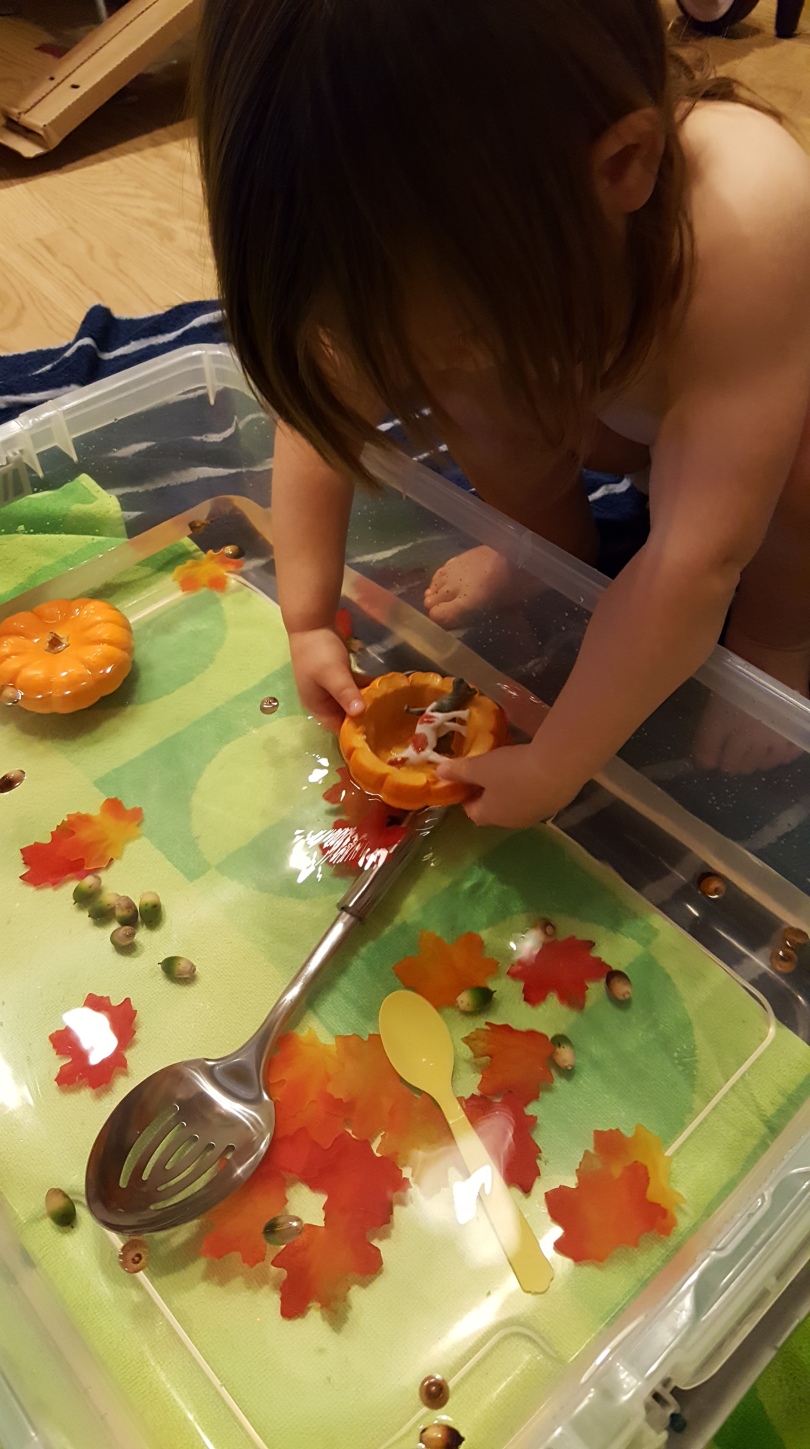 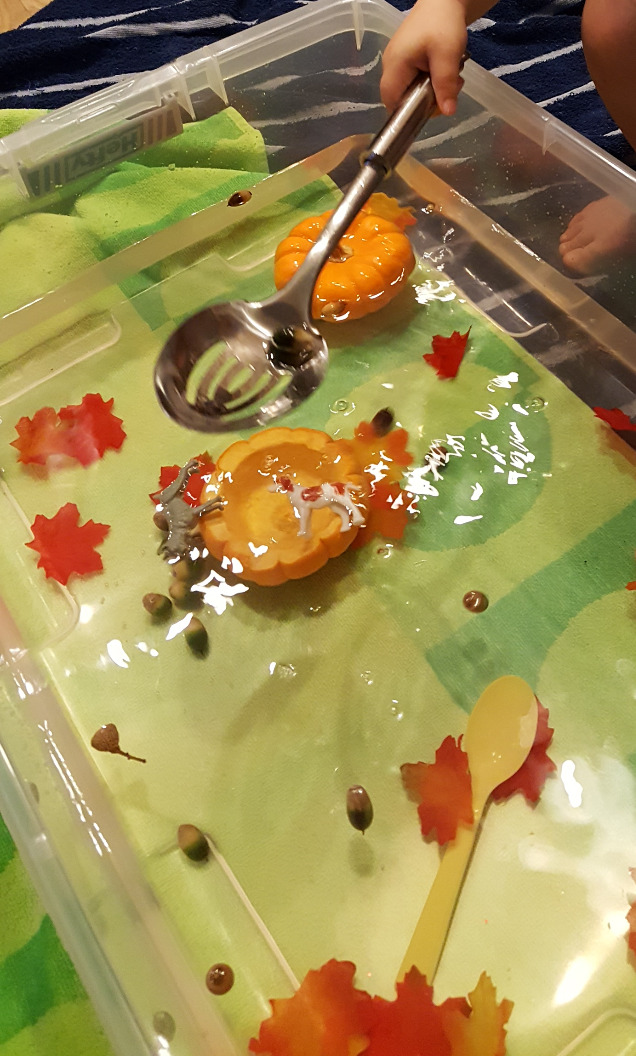 Cutting off the tops of two pumpkins and removing the seeds and some insides made them float and become boats for her little animals. It didn’t take long to realize they could also be cups for scooping and pouring the water. We also scooped up the plastic leaves and the acorns we found on our walks with the spoons and poured them into the boats. A lot of volume and size comparison as well as dexterity and motor skills happening in this one activity.  It did get a little messy sometimes, especially when she decided to work on cause and effect by dropping the pumpkins into the water and watching how much water splashed. I stopped this activity after the second time with a threat of putting the whole thing up. If we had been outdoors, it would have been a fine game, but indoors not so much. The mess, however, was easily cleaned up with the towels I had on the floor for this specific task. I definitely recommend this fun fall activity for your preschooler and even toddlers if you can leave out the small acorns.

Halloween is getting closer! What activities are you planning with your young ones?

Hi, I'm so glad you're here
WhimsyRoo is a site all about creativity. What can you find here?
DIYs from beginner to advanced, fun crafts for kids, tutorials, and shop handmade products in the WhimsyRoo store!
About me?
I'm Sam. I'm a mom, a wife, a dance teacher, and above all a creative mind. I love to follow my whimsy and work on new projects all the time. I hope you enjoy following my process and gain some inspiration on the way.